Today is my mum’s birthday. Ghillian Potts is 84. Like me, she has written all her literate life, and still has a notebook full of poems written between the ages of about 7 and 12, (of variable quality!)
To celebrate, my publishing company, Arachne Press, is publishing two of her books today. I crowd funded to the family, and my sisters and Dad all contributed.

I grew up with my mum’s stories, bedtime and bathtime we would congregate to hear the next installment in some long running saga (one of which featured a family of five girls whose names all started with R discovering that their headmistress is a witch, which went on for weeks), or demand yet again an old favourite; Jackanory had nothing on Mum, and the Singing Ringing Tree (remember that?) was a very poor second.

It turned out that the publishing world agreed, and three of Ghil’s stories for primary school aged children were published in the 1990’s, including Sink or Swim which made it onto Jackanory and we were very pleased that they had finally caught up with us! However relatively speaking, these were contemporary, girl/boy in the street, stories (even the one with a witch), which didn’t showcase Ghil’s magnificent flights of fantasy… Her agent ‘knew’ what would sell and just wasn’t interested in her magnificently funny and silly fairy tales for younger children, nor in her fantasy novels for the Young Adult market.

My all time most-often-demanded tale aged 5 or 6 was The Very Cross King, although when I asked Ghil to write it out for me recently, it wasn’t at all how I remembered. Unlike the glorious The Old Woman from Friuli, which was exactly as I remember it, possibly because it was written much later, when Ghil was learning Italian and heard this outrageous claim:

The people of Friuli are the most stubborn in the whole of Italy, and the women are even more stubborn than the men, but the old women… well!

As a  4 star review from The Book Bag says: … a clarion call to our daughters… Three cheers, I say!

Mum denies any intention to instil feminism in the young, saying that she was just having fun letting the Old Woman be as rude as possible, but it’s there nonetheless.

I commissioned Ed Boxall to do the illustrations, having worked with him before, and there would have been more if we could have afforded them. 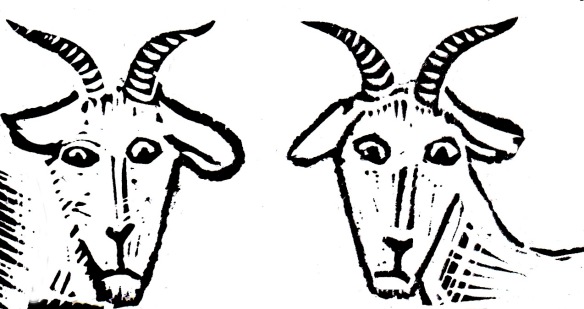 The other book Arachne Press is publishing is Brat: Book One of The Naming of Brook Storyteller.

I don’t have many shared interests with Ghil, we suffer from being very alike in personality but very different in outlook. Writing is our meeting place and touchstone.

Years ago I wrote an extended critique of the three books that make up The Naming of Brook Storyteller for Ghil, probably just before she offered them to the agent, I can’t recall now. And Mum did likewise for me on my novel The Dowry Blade. If there is one person it is difficult to take literary criticism from, it is your mum! Don’t try this at home! I’m sure she found my comments equally difficult, but we were both right. However, it meant that I know these books pretty well, and love them, although they have inevitable evolved over the interim, in fact I realised that some of the cultural peculiarities I had included in a early attempt at a fantasy novel (never to be published!) were swiped from Mum.

The decision to publish now was almost spur of the moment, but once made it felt absolutely right. Ghil’s writing inspired me to write, and these are fantastic stories that deserve a wider audience that they have had so far. Neither of us is getting any younger, and I want Mum to see these books published while she can still enjoy the process.

The trilogy tells the story of Brook Storyteller, orphaned and alone, befriended by outlaws and rulers;  trained to remember, exactly, what happens, and sworn to always tell the truth, in a way that the listener will understand, and with the power to raise or destroy people by the names she gives them. Her own name is precious, and changes over the course of the three novels through the success and failure of her own actions.

This is absolutely a series based on the importance of acting and speaking truthfully and the consequences for those who don’t.

So when I sat Mum down and suggested I might publish some of her work, the choice was pretty much already made as to which books to start with, although I did look at one of her other Young Adult books that I remember her writing when I was about the age to be her target market, but these are the stories I grew up loving.

The second in the trilogy, Spellbinder,  will be published in December, and the final one, Wolftalker, in June next year.

1 thought on “Old Women in Books: on publishing your mother”