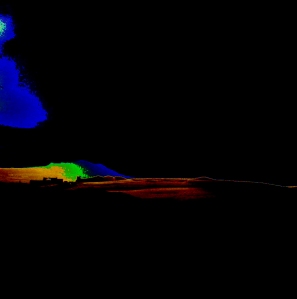 Agnes took hold of Rhani’s elbow and steered her across the concourse to the bank of lifts.  Rhani glanced uneasily at the bare interfaces on the lift doors.  Agnes’ grip shifted slightly.

“Its perfectly safe, whatever it looks like.  Only kills someone every couple of years, and only if they’ve had too much retsina and hit the pad too hard.”

Rhani looked at Agnes’ profile, and wondered if she was joking.  Her eyes flickered to the indicator board, and recognised, or more accurately, failed to recognise its origin.  All maker’s mark had been erased, if it had ever existed.  Rhani turned her head, looking at the people about her, at the lift doors, the concourse itself.  No markings of any sort anywhere.  No clue as to where any component of this station came from, nor the origin of any of its occupants.  Rhani’s hand strayed to her shoulder, where a nametag would normally be.  Her borrowed jacket carried no ship’s insignia, no company mark, and no name.  She felt almost naked.

The lift arrived.  The crush of bodies increased briefly as the occupants moved out on to the waiting pad.  Agnes stepped forward, and no one else got into the lift with them.  Rhani caught the look on the face of an old woman who had been waiting at the lift pad before they arrived.  Stoic.  The doors closed.

“Six.”  Agnes said.  The lift shot into motion, almost as bad as Jump.  Fourteen levels down, the doors opened.

<You are very welcome Ms. McCarthy.  >  Rhani gazed suspiciously at the lift controls.

“Come here often, do you?”  Rhani asked lightly, wondering at the influence that could get personal voiceprints onto public utilities.  Or private Jump beacons, for that matter.

1 thought on “The Dark Is My Delight”