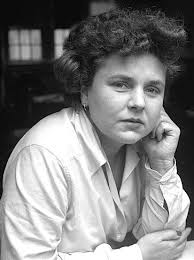 Today’s birthday girl is multiple award-winning poet Elizabeth Bishop (February 8, 1911 – October 6, 1979) “one of the most important American poets” of the twentieth century.

Elizabeth was great friends with Marianne Moore who mentored her while she was studying at Vassar. Elizabeth  travelled widely, often with female companions, one of whom Marjorie Stevens, she lived with from 1943 until 1947.

All my life I have lived and behaved very much like the sandpiper just running down the edges of different countries and continents, looking for something.

In 1951 a further season of travelling, on a fellowship, took her to Rio de Janeiro where she met  Lota de Macedo Soares with who she lived until Lota’s death in 1967.

I was made at right angles to the world
and I see it so. I can only see it so.

After 1970 she then travelled again this time with Alice Methfessel.

Close, close all night
the lovers keep.
They turn together
in their sleep,

Close as two pages
in a book
that read each other
in the dark.

Each knows all
the other knows,
learned by heart
from head to toes

Elizabeth was an alcoholic so it would definitely have to be a tea party.

Well, the cat is flourishing and gets more spoiled and more beautiful every day. His whiskers measure, from tip to tip, including his mouth and nose, of course, ten inches, pure white whale bone.