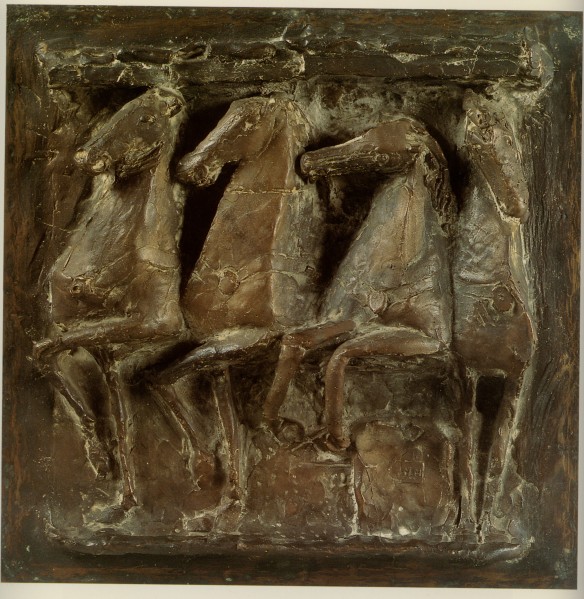 The Estorick’s collected twentieth century Italian art, a period and region I thought I knew nothing about, but there are a couple of Modiglianis, the piercing turquoise gaze and pursed lips of Doctor Francois Brabander standing out in a room of more muted pictures.  I did find myself thinking oh yeah Modigliani and moving on.

Then I recognised the pot-shaped women (or are they woman-shaped pots?) of Massimo Campigli with their brittle ceramic smiles looking like ancient Etruscan goddesses, until you come across one of them blandly gazing across a loom, and then another – side by side, one in polychrome, the other in red pastel (the pastel is a more accurate loom) – and the domestic usefulness makes the women seem at once more human and more unlikely.

There are some really interesting paintings by people I hadn’t heard of – I was particularly taken with Giacomo Balla‘s The Hand of the Violinist, which is a multiple image of a hand on the strings of a violin, broken into lines perhaps by the strings, and shaped like the sounding board of a dulcimer, an odd thing but pleasing.
Zoran Music‘s Horses and Landscape made me think of Eliot’s Journey of the Magi, a group of multicoloured horses, spotted and striped in blues and pinks, haunches touching in a dispirited huddle against the cold, retreat into a landscape of dusky hills.  It just begs for one of the riders to turn back to the viewer and say: A cold coming we had of it.
There are a few sculptures: I especially liked Marino Marini‘s Quadriga, a wall plaque of four horses face-on, crowding through a doorway knees raised as if contemplating a delicate can-can, that had overtones of ancient Rome.
Giacomo Manzù‘s Bust of a Woman is a distorted long-necked bust wearing an expression of self-possessed happiness, that I think I could  live with if someone asked me to; although there would be days when I’d be yelling what are you smiling at, and throwing a blanket over her.

There are some works that left me indifferent, a lot of sketches that are only of significance because of who drew them, some very studious studies of still life, and a very ugly Death of a Hero by Renato Guttuso which isn’t something I’d give house room to, but led to an animated conversation with the lady on the desk about Flemish Medieval art and Gerard David’s The Flaying of Sisamnes being even more not what you’d want in the livingroom, although neither of us could remember who it was by, or the exact name, she knew it from my description and recollection of seeing it in Bruges. And this in a gallery specialising in Italian art of the twentieth Century.

A collection worth seeing, particularly with smells of Italian cooking wafting up from the caffé.

£5.00, concessions £3.50, includes permanent collection and temporary exhibitions.  Free to under-16s and students on production of a valid NUS card.

The second of our forays into North London on the lovely Overground; appropriate, since we were heading to an exhibition strong on leisure journeys by public transport.

I didn’t know the Estorick Collection existed until A’s walking buddy J handed her a leaflet about their current exhibition of Edward McKnight Kauffer posters, The Poster King.  Most of the posters are from the heyday of  Transport advertising in the 1910’s-30’s, both London Transport and Shell being well represented and many of the images were familiar in a subconscious way, possibly from films of the time.

They were also familiar because they made use of styles prevalent at the time; and reminded me of such diverse artists as Jean Cocteau, Picasso, M C Escher, Clarice Cliff and John Heartfield.

A wide range of styles:

Bucolic scenes of trees and rivers (that’s Watford? Really?) and oddly what seems to be lime kilns at Godstone (wonderful image but as a destination?), aimed at tempting the urban workers out for a day in the countryside by train, bus or tram.

Scurrying windblown shoppers abstracted into mere suggestions of silhouette, shadow and rainy reflection (A particular favourite for me) who are wisely advised that the tube is a good way of avoiding all that weather, though anyone who (like me) has got on a tube having already been completely drenched in an unexpected downpour, knows how silly you can feel dripping on dry troglodyte passengers who got on before it rained.

Quirky cubist advertisements assuring us that Actors, Artists, and Magicians each prefer Shell.

Pastel-coloured marionette-like figures in paper collage backgrounds extolling public holidays for trips out, one Green Man for Whitsun, reminiscent of a tarot card: the fool tripping along his mind wandering, all that was missing was the drooping hose and snappy dog. 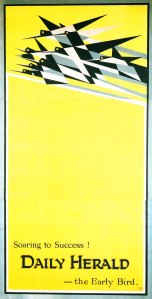 and wild, thrusting, lozenge-shaped birds that would be Oyster Catchers if their beaks were red, but aren’t because they aren’t birds, they are an idea of progress, happily flying into the future together in praise of the Daily Herald (“Soaring to Success… the Early Bird”).  This particular image makes great use of space, the birds are roughly the top quarter of the image,  and the message is maybe an eighth and right at the bottom; in between, an expanse of vigorous yellow silence.

As much social history as art, I would highly recommend this exhibition for both the images themselves and as a window onto the artistic movements and advertising claims of the time.

There are a number of gallery talks coming up that might be worth catching:

£5.00, concessions £3.50, includes permanent collection and temporary exhibitions.  Free to under-16s and students on production of a valid NUS card.