Here’s a snippet of audio of my reading of Red Dress, at the Brockley Max fundraiser at Halloween.

We raised around £200, but more is needed – If you’d like to support our local festival, there’s a crowd fund here

If you liked the audio, Red Dress is available to buy as an e-story from

Cut a Long Story along with other short stories by me.

People who know me know that I don’t do horror. I hate creep and gore, and  I actively like bats, spiders and so on, and don’t appreciate them being demonised.

Be that as it may, I am quite fond of a subtle ghost story, and I AM reading a small horror story, in company with other local writers for Hallowe’en.

Join us on 31st October at 7.30, upstairs at the Honor Oak pub, St Germains Road, SE23, for Frightful Yarns, in support of our local festival BrockleyMax.

This is a fundraiser, so ticketed, and £5 to get in. Advance tickets available here (with booking fee)

I’m sure there are tickets on the door too. Fancy dress optional.

Come along for a tale of entrapment and revenge through the medium of dance. 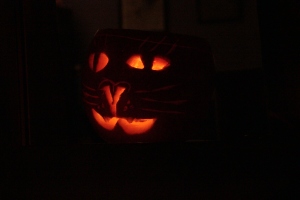 The latest news from the catwalks … um … doorsteps of South London, where the fashions of the night come to your door for a minimal payment of handfuls of jellied eyes, chocolate bites and the occasional satsuma is… dayglo is the new black.
Of course you can’t just assume that the show will come to your door, you need to show willing and advertise your openness to revellers with the traditional lantern. This year ours was a cat, and we got several compliments on its raffish charm, including that we had been channeling Picasso!

Back to our report: This Hallowe’en’s hairstyles are streaked candy pink or pumpkin orange. Make up is livid, but carefully applied for that just risen look, and for those tired of the nightly routine of makeup fit for the dead? A mask!

A wide range of styles available to suit every mood… one size fits all.  Hats are generally traditional in height though wide-ranging in shape and colour, with an interesting voodoo influence. 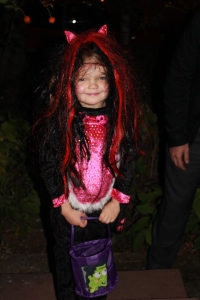 For the younger ghoul: pumpkin, spider, cat and skeleton outfits are de riguer, with phosphorous glow a key element in the design.
The night was not without casualties, small undead who had eaten too many gory treats were heard to whine and wail more authentically than their parents would wish, one particularly rabid group of zombies had to be threatened with the trick we had up our sleeve to ensure there would be enough bait (sorry, treats) for all the neighbourhood monsters, and our cat Elton got a lot of exercise running up stairs every time the door was banged upon.

At the point when the more stalwart Julian started flinching at the doorbell we extinguished our pumpkin and settled down for dinner and the remaining eyeballs...

This did get me thinking about Horror as a genre.  I really don’t enjoy horror, I can’t abide zombies, torture or graphic violence, although I used to watch Buffy with great enjoyment.  I couldn’t even bear to read Terry Pratchett’s Reaper Man because it had a zombie in it, the whole idea turns my stomach, and that’s the only Pratchett I’ve not read.

But I do like a good ghost story, if like is the word, appreciate might be closer to the mark. M.R. James springs to mind, and tends to stay there late at night, wiffling about in my subconscious, it’s all suggestion and oblique reference.

I’ve  written a couple of ghost stories (All Hallows, Eye of the Beholder) and they are definitely not in the M. R. James mould; They aren’t meant to be frightening: I think of my ghosts as lives unfulfilled, trailing on after death, which is a bit frightening, actually.  So there’s a moral there, if  you don’t want to become a ghost, live life to the full!

There are plenty of witches in my writing, Sorcha and Ashe in The Dowry Blade, Hraefn in Sky Hunter, Wind lover, Adamanta in The Bone Box, Beth and her awful aunt Brenda in Blood will Tell, Cicely in All and More, and I don’t think any of them would subscribe to dayglo streaks in their hair!