The short story Mosaic of Air, (title story of my first collection and republished this coming September)  began life in a computer literacy class in the late 1980’s. I was bored, the class was going slowly, and I’d been given some BASIC code to play with.  I started to imagine what would happen if the computer really talked back. Cal appeared at my elbow and started footling about with her highly illegal sonic knife, and within a few minutes I knew everything about her – her schooling in sabotage, her stammer and her obsessions. Rhani and the McCarthys came later, and have (inevitably) somewhat taken over from Cal in later stories, but it was a big moment, that dull afternoon in Catford.

The title is from an Andrew Marvell poem and it should really be That Mosaic of the Air – a reference to music, which inspired Computer’s idea of appropriate ceremony.  I gave  Computer a personality but let her binary logic run riot. Consequently, inevitably, things do not turn out well.

You can pre-order a copy of the new paperback version of Mosaic of Air at a special £1 off pre-publication price here.

Here’s the link to my conversation with the very friendly Andy & Rev at Cocktail Hour. (Cocktail half-hour in this instance, but who’s counting?) A wide-ranging discussion encompassing spiders, cat fonts, learning to be funny, and setting up Arachne Press, as well as – you know – my actual writing, books and so on; together with me reading a snippet of Arachnë’s Daughters, which is in Mosaic of Air.

Brixton BookJam has moved to 8th July due to a double booking at the venue. Everything else is as previously mentioned.

I will be reading and running workshops at Towersey Festival (Near Thame, Oxfordshire) over August Bank Holiday weekend with Spread the Word, no more details yet but will know more in a week or so. 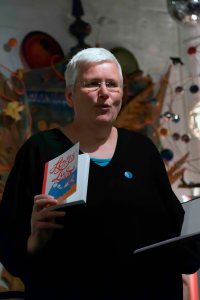 Reading from Mosaic of Air

Opportunities to hear my work live!

I’ll be reading from The Bone Box from Mosaic of Air at the Arachne Press Weird Lies Preview this Sunday 9th June 6-9 at Misty Moon Gallery,

and then next Tuesday, 11th June 7pm, my story The Queen’s Safety is being read at Liars’ League as part of their Kings & Queens theme night.

And then I’m reading at Brixton Book Jam  This is now Monday 8th July due to a double booking at the venue (so ignore the date on the poster) some time after 7.30 not sure what yet, possibly Leaving.

This is a strange way of going about things, but I’ve just chosen a cover for a book that I haven’t finished writing yet.

We’ve been running a competition over at Arachne Press for the covers of the next two books, and I got down to three gorgeous, wonderful designs for the reprint of Mosaic of Air, and couldn’t choose between them. I wanted them all! So I had a bit of a think about other books we have planned, and decided that only one of the designs would only work for a collection of stories, and have chosen that one for Mosaic of Air. So I get to use the other two designs.  for my two novels.  Anyway the one that I’ve not finished writing yet is this, from Kevin Threlfall – you’ll have to imagine a different title for now. 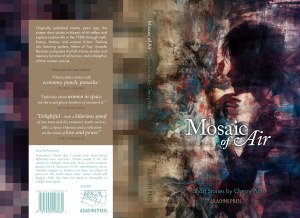 The book is a sci-fi novel and doesn’t have a title yet, though it’s going by The Dark Is My Delight, which is a 17th century song about nightingales and sex, basically (words by John Marston, music anonymous); nothing to do with my storyline as it happens, but it has the right feel to it, out of context. The book started life as the lead story in Mosaic of Air, and has grown and morphed into something much larger and more complex. As Mosaic of  (the) Air is a quotation from an Andrew Marvell poem (describing music) it seems right to continue the theme of music and the 17th century by picking another title from the same era. (I had thought about Heavy Time, which is also a 17th century musical quotation, but it’s already been used for an excellent Sci-fi novel by CJ Cherryh – who also nicked my intended pseudonym when I was about 17, at which point I decided to write under my own name and have done with it.)

So, interesting how that all galvanises me to finish the book!

There’s been a lot of chat going on recently about short stories, including on the radio, this week’s Open Book had  Aminatta Forna giving a potted history of the short story from Poe, Chekhov and Saki to Helen Simpson, and even Ramblings (a walking programme … fascinating, listen!) had Claire Balding in company with short story writer Anna Maria Murphy. (nothing like being stuck at home recovering, for catching up with the radio in between sleeping.)

Having written two collections of short stories myself (and with enough material for 2 more!) and planning to publish (I hope) at least 6 anthologies over the next year or two, you’ll have gathered I’m quite keen!

I had an email yesterday in response to my posting about London Lies, in which the writer says

and asking how I managed it.

My very first short story was published in an anthology over 20 years ago. It was called Penelope Is No Longer Waiting, and I had sent it to Rosemary Manning, who was a friend, to cheer her up when she was unwell.  I got a phone call a couple of days later, saying

you could publish this

and then I saw a call for submissions from Onlywomen Press, and sent it off, and was accepted.  That easy.  I can still remember opening that letter, so thrilling.

I had two more stories in a further anthology at OWP, and then having got quite friendly with Lilian Mohin, the director at OWP, she was complaining about the quality of a lot of the submissions she received, and how she wished everyone wrote as well as me (or words to that effect).  My response was

plenty more where that came from

and I started drip-feeding her stories, one a month, under the heading of ‘entertaining Ms Mohin’, until she gave in and offered to publish a collection.  That was Mosaic of Air.

Mosaic didn’t sell very well, partly because I was in a wallflower phase and wouldn’t do any publicity, (I am so over that, as you may have noticed) and ended up with the remaining stock being pulped.  Not a happy moment!

Life rather caught up with me then and I wrote almost nothing for 11 years, then pulled myself together and published another collection, Tales Told Before Cockcrow. This did much better than Mosaic, and has almost sold out.

But what is it about the short story?

I’ll admit that some of my ‘short’ work is very long, almost novella length (now that’s really difficult to publish) but there’s something about a short story that’s like a jewel: carefully faceted and burnished to perfection, not a word wasted nor out of place.

Novels often have slow passages or subplots that don’t quite come off, but you are in it for the long haul so you put up with it, whereas you can’t afford to drift in a short story; and you can take risks and play games with language and structure, and the reader is prepared to come along because they know it’s not going to take you long to reach the punchline.

Since joining a writing group (WOOA) I’ve discovered that with a defined set of limitations I can write a fully formed story with a beginning middle and end in 20 minutes flat. Short Short stories… not quite flash fiction, because if it’s working, I write fast.

A really good short story settles into your mind with a sigh of satisfaction, like a good malt, or a perfectly toasted and buttered crumpet.