Early music is a passion I share with my partner A, and a chance discovery led to the inspiration for an historical novel, The Cold Time.

Sometime in 1993 , arriving early for a film at the Odeon at Marble Arch, we headed into HMV to browse, and I picked up a new release in the early music section:  Sinfonye’s the sweet look and loving manner.

Dire title, I thought, lovely cover– a medieval painting of two women in a garden. Look like lesbians I thought, turning over the CD to discover that what I had was recordings of very rare songs, written by women in 12th and 13th century Languedoc.  I couldn’t resist, I bought it, loved it, confirmed that one of the songs was indeed written by a woman for a woman; and I was off- research, research, research!

I found The Women Troubadours a book of transcripts of the songs with English translations and brief biographies by Meg Bogin. There was sufficiently little real information to leave plenty for my imagination to fill in.  I found all the songs interesting and full of personality, and apart from the song that started it all of, Domna Maria written by Beiris de Romans, I found my title in a song by Azalais de Porcaraiges (Portiragnes 5m east of Béziers) which follows the traditional troubadour motif of using the seasons and weather as a metaphor for her love life:

Now we are come to the cold time
of ice and snow and mud
and all the birds are mute
for not one inclines to sing;
and the hedge-branches are dry
no leaf nor bud springs up,
nor calls the nightingale
who woke me once in May.

before going into a strange litany of (apparently) places she’s saying goodbye to because she will never see her lover any more.

To God I commend Bel Esgar
and the City of Orange
and Gloriet’ and the Caslar
and the lord of all Provence
and all those who wish me well
and the arch where the attacks are shown.
I’ve lost the man who owns my life,
and I shall never be consoled. 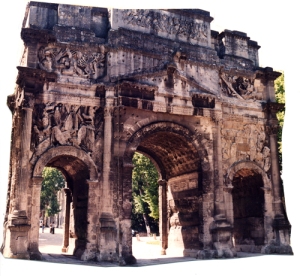 The references are obscure, but I think, from having visited Orange, and researched (oh the research) architectural terms, that it is her lover, Raimbault d’Aurenga’s home she is referring to: Gloriet is a term used for a tower, and the arch with the attacks is a Roman triumphal arch which at the time she was writing was effectively Raimbaut’s front door.  These days it is marooned on a traffic island on the ring road with heavy trucks pounding past.  I love this vignette of loneliness,  it is all the more challenging to realise that what seems to be a complaint against the medieval equivalent of not returning her calls, may actually be in response to Raimbaut’s death.

As I researched further I discovered there was overlap with the Cathars in terms of time and territory, and loosely at least in politics and got some interesting responses when I discussed my research with friends and family.

A lot of nonsense is talked about the Cathars, and as an atheist I have to make a bit of effort to relate to it all, but I was quite shocked by how ruthlessly the Cathars were treated; I remember mentioning this to my mum, whose response was ‘they’d all be dead by now anyway’ and a friend, who got cross and seemed to think that being distressed by people being tortured and burnt alive put me in some ‘anti catholic’ bracket, which hadn’t even occurred to me:  I had been thinking of the crusade as a land grab by the French, rather than anything motivated by genuine religious feeling of any kind. Once she had raised it, of course, the whole religious angle became more of a motif in my research.

So, more research; too much research. I have an entire bookcase of ‘essential’ reading that I shall probably never finish, obscure books about Jewish ghettos in Provence in the thirteenth century, articles on littoral erosion …  books on attitudes to death, building techniques, farming practices, the position of women and the persecution of heretics, more than half of them are in French.

I had lessons to refresh my French (not a lot of use with a medieval vocabulary- you would not credit how long it took me to cotton on to Terre Sante meaning the Holy Land and Outremer overseas, nor the likelihood of coming across témoin (witness) and blessé (wounded) during your average French class) I now own an enormous French dictionary which is too heavy to lift, as well as smaller Provençal, Latin and Spanish dictionaries, just in case!

We spent a total of five weeks over a two-year period touring Cathar castles and hilltop villages, abbeys, rivers, pilgrim spots, mountains, graveyards, springs and ruins. The biggest realisation I made (apart from how much further apart everything was than I had expected) was that part of the reason the Albigensian Crusade was successful  must be that most of the castles they were attacking were effectively facing the wrong way- expecting attack to come from the south.

I met Stevie Wishart, director of Sinfonye a while back, at an early music festival at the South Bank, and thanked her for setting me off on what sometimes feels like a wild goose chase, but has widened my horizons considerably, in terms of musical taste, philosophical and architectural understanding, to say nothing of languages and travel!

Quick update, follow this link for the Radio 4 Early Music Show special on Trobairitz, not sure how long it’s up for but while it’s there, an hour’s music that’s spot on.