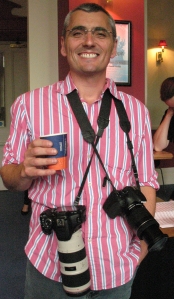 Sunday: It’s interesting, having looked at Tony’s photos I’m more aware of how our ‘acting’ looks from the outside: who is doing a really good job, who relies on eye rolling and mugging, who doesn’t seem to be acting at all. Adapt our output regulators accordingly.

A and I spend quite a lot of time (usually in the car on the way home) discussing the lead characters:

Anyway, rehearsing is a bit like living inside a soap opera on a loop.

Before we get started A and I go out front for some air and a bit of sun, along with several other members of the chorus, some of whom skip off down the high street in our costumes.  I can’t help wondering what the burghers of Blackheath make of it; we should take fliers!

We meet Rose who is having one of those phone conversations where you give directions by waving your arms about. It turns out the harpist, who wasn’t there at all yesterday, is late and a bit lost. Rose asks us to keep an eye out for her, and rushes off to some other crisis. How do you tell whether a car has a harpist in it? We decide it would need to be a big car, and smile hopefully at a lot of strangers, before Rose reappears and lets us off to get our notes from Harry and Duncan.

Nicky has arrived to help with hair and makeup and does a fantastic job, aided by one of the ushers, who is a dab hand with a comb and kirby grip. 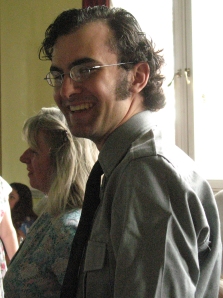 Act I goes very well, although clearly eleven is the maximum cobs David can shuck! Jonathon has tamed his locks, with help from Simon Dyer, Nicky and our Brycreem, and it rather suits him slicked down with curls at the back of his neck; unfortunately this means he is late for his cue as postman, and isn’t given his bag which is rather crucial to the action.

Interval: Cup of tea with Tony and he is very excited because having seen the opera through once yesterday, he is getting into the best place for some really great shots this time. Photos will be available for viewing on his web site soon, and will be available on DVD there are fliers in the dressing room.

Peter, from the orchestra, gives me a cheque for 5 copies of the book, that means we are up to 19 paid for-orders. Bring your chequebooks with you folks, it’s all to support next year’s opera and (I hope) a great souvenir. I want to get up to 50 orders, as although you will, of course, be able to purchase individually from the printers website, that will cost you more, and get the Halls less. 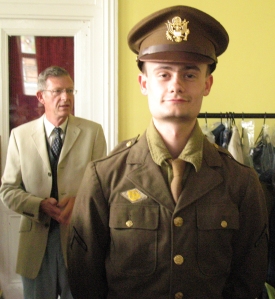 Act II: there are problems with the musical chairs again; the right number of chairs are put out, but the game takes too long, partly this is because there seem to be an awful lot of children on the floor by our table so we are slower putting out the chairs as we are in danger of clonking someone on the head, but the main problem is that people have been told which round to go out in, so they rush round to chairs on the other side of the row because they are still ‘in’, and it slows it all down. They should just be told that if they are competing with Onegin or Olga (or the crucial child) for a chair to give it up to them.

Duncan takes us through Act III about four times at the piano,and as a result we get pretty much all of it right on stage, It is certainly more forceful.

Bryony and co are still trying out different gowns on some members of the chorus, and Mona is a vision in turquoise today. Sarah has an astonishing black and gold number with a train, that made me almost wish I’d gone for a dress after all, though it wouldn’t have the same effect with me wearing it !  The dancers have sprouted little white rose buds on the neckline on their bodices.

If I could have one thing different, it would be to have a monitor in the remaining un-monitored corner- it would be in my line of vision most of the time. Act III is a particular problem because my peripheral vision isn’t great, and I have to screw my head right round to see a monitor and loosely appear to be looking at Onegin,as I just can’t see Nick through the wall of basses standing between us.

We practice our curtain calls, and then we have to do the musical chairs a few more times, but something always goes awry. Eventually Harry decides the best thing is to drop the first round, so now we have to remember to bring only six chairs from our table.