Organising Longest Night kept me away from my own blog for a while, but it was completely worth it, not least because it gave me an opportunity to share my first ever musical composition with musicians who would do it justice. Here are Ian Kennedy and Sarah Lloyd singing The Cold Time.

This is a Trobairitz song from the late 12th Century, written by Azalaïs de Porcairagues, in what is now Languedoc. It is written in a form of Provençal known now as Occitan. The tune is lost, and I came across it in Meg Bogin’s book The Women Troubadours, while researching my historical novel about Cathars and Trobairitz, The Cold Time, which I may eventually finish.

I actually wrote the melody a very long time ago, but coming up with harmonies has been a slower process. Ian & Sarah were incredibly patient with me!

I learnt Provençal, and tweaked Bogin’s translation for poetic rhythm and sense. The original song is a much longer work, but only this first section stands alone without understanding the social mores of the time and the geography and architecture of the city of Aurenga (Orange) – it was only when I went there and visited the museum that I understood a reference later in the song to the ‘Arch with the Triumphs’. A Roman triumphal arch, which for several centuries was built into the castle, effectively forming the front door. This was certainly the case when Azalaïs knew the then count,  Raimbaut d’Aurenga. These days the arch sits on a roundabout to the north of the city centre, and getting to it is a death defying race across, dodging massed lorries. 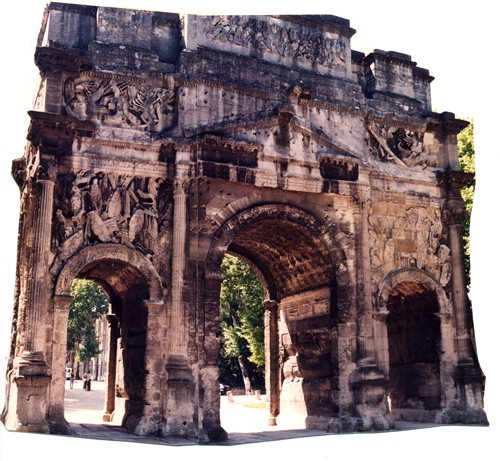 Notionally the section here is a typical Troubadour song of the seasons, although Spring was a more popular subject than Winter. However, the song is in fact an extended metaphor and a farewell to Raimbaut, Azalaïs’ ‘Nightingale’. She does not say so, but he had died.

My passion for words nearly got in the way of my interest in music, and I was almost oblivious to tunes until I introduced myself to a wide variety of music via the library I worked in when I was nineteen. I think I took music for granted until then- I didn’t understand the work and skill involved in a beautiful melody, or even more so a harmony; bizarre given I had learned to play piano, recorder, clarinet and oboe by then (all staggeringly badly- maybe that was the problem!) 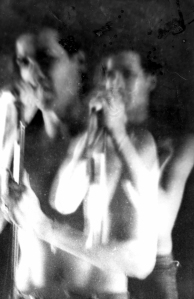 I’m not sure that there might not be a connection to being into Punk music – The do-it-yourself-garage-thrash approach deconstructed the whole process for me and stopped it being something to be in awe of.  I was briefly in a punk band, playing one finger piano and shout-along-a-backing-vocals. This was when I took to live music and it struck me when I started converting my vinyl collection to digital, that I have almost no records from this period: I spent my money on gigs, it was all in the now.

The ‘Indie’ scene was just getting going and the few records I did buy were Rough Trade or Stiff Records output.  I quickly bored of ‘traditional’ Punk’s nihilist approach and sought out artists that were more difficult to categorise. I went for

the quirky and down right bonkers back then, John Cooper Clarke (words again), Spizz Energy, The Revillos, The Teardrop Explodes, Echo and the Bunnymen, The Jam, Dead Kennedies, Human League, Skids, Penetration, Pere Ubu, the Edge, Lena Lovitch, Dalek I, UB40, Poison Girls, The Specials, the Slits and the Raincoats: I spent a lot of time in sweaty dives like the Marquee (great atmosphere), student unions and at Rock Against Racism gigs with my head ringing from being too close to the speakers, sometimes leaning on them to steady my camera- daft idea, its a wonder I didn’t do permanent damage to my ears!

Later, I settled into a liking for women’s bands, the Guest Stars, Lydia d’Ustebyn Orchestra, Amazulu, PMT, Friggin’ Little Bits, the Bright Girls, Jam Today, Alex Dobkin; the Albany in Deptford became home from home, – just as the Marquee had been for a while.

In the library the music was more staid, and I worked my way systematically through everything that was unfamiliar.  I tried and discarded Gilbert & Sullivan and a great many musicals, quite fun, but not for me; and Country & Western, as it was known then (although I’ve gone back to it … those stories again). I discovered African tribal music, Flamenco (which I should have picked up sooner, Dad’s collection is stuffed with it) and most importantly  Early (medieval and baroque) Music: musicians like Emma Kirkby the Deller Consort, Phil Pickett, David Munrow and …counter tenors… an acquired taste, which didn’t stick with me at first, so I found myself skipping the tracks with words (mostly not English anyway) and becoming a great fan of Dowland, Tallis, Handel, Purcell, Gluck, Monteverdi, Susato and Machaut, and many others, and  divorced music from words for long enough for me to really get to grips with the patterns and shifts.  I was struck by the really early tunes- earthy, rhythmic and somehow contemporary; and by the sheer unearthly beauty of some of the church music – If you’ve never heard a perfect ‘dying fall’ (I was going to say you haven’t lived, but that’s plain silly: you will have missed out on one of the most swooningly gorgeous things your ears will ever encounter.)  Early music was also my route into Opera.  I really found opera tedious until I heard Purcell.  I still think it’s daft, but enjoyably so, although a lot of Puccini et al leaves me cold.