There are only ten days to go before Sing for Water, at the Mayor’s Thames Festival. Preparation chez nous has been a bit sporadic, as we’ve only been able to get to two of Vocal Chords rehearsals. However, we had an impromptu practice with a couple of friends on Tuesday, and might gatecrash a Nunhead Community Choir rehearsal tonight if there is one (lost the list of dates) and there’s one more VC evening we can make. Preparation apart from that has gone hand in hand with decorating the hall, bellowing along to Let Love Rain Down (my favourite) or Yemaya on the MP3 while sanding skirting boards, and more mellow carolling has happened to Moon River and Gmerto while painting the bannisters. What must the neighbours think!

If you would like to sponsor Vocal Chords for our contribution to Sing for Water, which raises money for WaterAid, to bring safe clean water to those who need it, you can donate via our virgin money giving page

It would also be great if you can come and swell the audience on the day. 15th September 2.30ish. get there for 2 to be on the safe side, and get a seat, there will several hundred of us singing, so space for the audience gets quite tight!

About a quarter of the choir copyright Cherry Potts 2011

What a great day of singing.  My feet are feeling it, but we’ve had a superb  day out, doing what we love best, and raised some money for charity in the process.  Our sponsorship page will function for another three months, but no need to wait, donate now! Please!!

Around 800 people, representing over 50 choirs from all over the country, looking extremely glamorous in sky blue (sopranos) purple (altos) turquoise (tenors) and midnight (basses), provided a visual spectacle as well as a darn fine noise.  We had been asked to bring along silky-shiny-sparkly things to wave at the end, which I had thought a bit naff, but it looked wonderful, because there was so much of it.

another small portion of the choir copyright Cherry Potts 2011

The rehearsal went smoothly apart from not having time to go through what Una May might ask us to do in Zema, but I had the impression it would change anyway, and I was right about that.  We had a whisper-through in the City Hall cafe while the children’s choir was on, and then it was different when we performed it anyway.

It was a very nasty crush waiting to go on, a hot, airless space and far too many people standing for too long.  At least one person keeled over, but fortunately they did so well in advance of the performance and I think made it out to sing.

It’s almost scary how good 800 people can sound belting out Mraval Zhamier, with what Stephen calls ‘pointless grandeur’.  We were  exhorted to ‘put your butt into it’ (Michael, Zema and My Mouth) ‘Sing from your barrel-likes’ (Stephen, Mraval) and also, to sing in tune (Roxane, most things)!

Equally we sounded great murmuring our way through Water Wrinkles, a song written by one of the choir members, Morag Carmichael.

It’s quite hard to get a feel for what you sound like when performing, but the feedback we got from audience and stall holders was very positive indeed.  Two separate stall holders, recognising from our turquoise clothes that we were in the choir, commented that they could hear the rehearsal and it had been exciting enough for them to have been anticipating the afternoon with enthusiasm, and how disappointed they were that they couldn’t hear the performance, as there was too much ambient noise in the afternoon … I think the wind direction may have changed too.

Another advantage (apart from being flattered by stall holders) of being dressed up, was that when we were wandering about between rehearsing and performing, people asked us if we were performing, and we were able to spread the word on WaterAid: we take our responsibilities seriously  – it isn’t just about having a good time.

Sing for Water is in its tenth year. Over that time it has raised over half a million pounds tohelp WaterAid provide permanent sources of clean water to communities  who need it most.

The audience had a whale of a time, indeed, they may have enjoyed themselves almost as much as we did!  Stephen taught them (and us) a new song from scratch, and had us all doing actions to go with, and Una May got them joining in on Zema, again, complete with actions.

My favourite of the songs remains Let Love Rain Down, which gave us tenors a moment to lead and shine, but Ide Were and Zema came in close equal second, possibly because it was African songs that got me back into singing; I love the energy and the  vibrancy of the harmonies, and the challenge of the languages – no clicks this time, but I’ve got quite good at those.

Smaller subgroups were singing around the place before we performed, and we caught a group from Bangor (Wales) whose repertoire seemed to be mostly sea shanties, which meant we could join in on the choruses whilst sheltering from the (only) rain shower.

I’ve never made it to the Thames Festival before, I think it may become a permanent fixture in the calendar from now on.  There’s a friendly neighbourly atmosphere you don’t expect from central London, and I love the Thames.  We were too tired to stay for the fireworks, and with the hurricane and rain approaching it didn’t look a terribly attractive idea…  Maybe next year!

It’s been a manic couple of days, we drove home from holiday yesterday, had showers and went out again, to North London for a final Raise the Roof rehearsal for Sing for Water.  Mel hosted a tight squeeze in her flat, and everyone brought food and drink.  A boiling hot evening, all the windows open and we really felt we’d missed a trick not having a big banner and buckets on ropes to collect from passers-by!

It was very noticeable that Mraval Zamier that went better with a glass of wine in the hand and another in the belly.

The thing about Sing for Water (as opposed to wine) is that it raises money for WaterAid: more children die from drinking bad water than from any other cause; and just £15 can give a child clean water, not just for a while but long-term.

Having sung last night we were at it again this afternoon, this time in Vauxhall, with the rest of the choirs who will be singing on Sunday (2pm, the Scoop, next to City Hall – nearest station London Bridge – it’s free, you know you want to be there!)  Or at least, some of them. Disconcertingly, we were told that only about half of us were there (and there were loads of us), and that there are children’s choirs involved this year too.

There are choirs from Ireland, Wales, Yorkshire, Bristol, Dorset, Manchester, Brighton, Somerset, North London and many, many like us, from South London… If I missed anyone I apologise, I wasn’t taking notes.  We met several people we know, but didn’t know were in choirs.

The organisers Roxanne and Michael were in fine form and had us singing very quickly, sometimes with both of them conducting when the song had radically different patterns for the low and high voices and the three-hour rehearsal flew by,complete with a guest conducting by Stephen of the Spooky Men’s Chorale for Mraval Zamier.  Mel volunteered to sing the lead in call, as the assembled horde had been asked for an ‘Epic Tenor’ to step forward: Stephen wanted a man, and cross questioned her on the epic-ness of her voice, he wasn’t in doubt for long!

you can sponsor us for Sing for Water here:

it’s not too late!

For the past few weeks A and I have been rehearsing for Sing for Water, a concert in London to raise money for Wateraid.
The concert takes place on September 11th at 2pm, in the Scoop, next to City Hall on the South bank of the Thames.
Not surprisingly a number of the songs have a watery theme!
We have reached the stage where we think we know what we are doing, and either of us is liable to burst into a chorus of one of the songs without warning, startling cats or passers-by.
So we are singing songs from Nigeria in praise of a river-god(dess?), songs about light reflecting off the Thames at Hammersmith, songs extolling love to rain down… and for no apparent reason, Dancing in the Street!

Saturday afternoons have found us at the local Methodist church with about 30 other members of the Raise the Roof tribe, singing our heads off.  This week we really felt like we’ve cracked most of the songs, although we are struggling with how the Hammersmith Bridge song fits together. 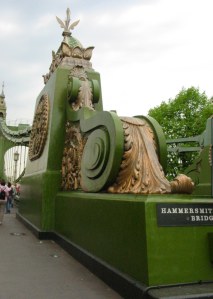 Mel suggests that it’s two songs in conversation: a bright sparkly surface song and a deep flowing underwater song, complete with a Pike(!)… but that doesn’t quite get it going.

I suggest we put down the music and just see how much we really remember without it, so that we can look at each other and fit the parts together. That’s a bit better, but it keeps dropping into dreary.

Then Mel takes it up a tone, and miraculously it works – and takes off into a really lovely piece. The only problem is we can’t sing it in that key on the day as there will be 700+ other people who learnt the right key. However, at least we got the shape of it, and will have to growl along at a lower pitch on the day.

As a group we have a couple more rehearsals before the big rehearsal the day before the concert, with all the choirs together, although A and I will miss one of those.  Notwithstanding missed rehearsals they are neat songs and we are already singing them well, so by the day it will be fabulous.

It’s going to be an exciting event, you can see video of the event a couple of years ago here: and here

And of course you can come along to listen to the concertwhich is free (although I expect there will be buckets being shook).

And you can sponsor me (and other members of Raise the Roof, if I ever get the software to work) here.  Please do donate – while we are having fun, the point is to raise money for Wateraid.