This is the final ‘Music’ rehearsal, and Nick is trying to get us off ‘the book’. Some of us require weaning, others are trying to go cold turkey.

The waltz scene from Act II worked pretty well without the words ‘n’ music in front of us, although the words on some of the more exposed sections were …um… fuzzy, I know I transposed one set of lines for another, and went nyaah mmmm laaa at one point… I knew the words, I just couldn’t access them fast enough.  I realised pretty fast that I don’t know Act III at all well, so that’s my task for the week, get it down pat.

Nick described our performance as getting a bit flea-bitten… I’ve no idea what he meant, however he advised us to sing elegantly when commenting on Tatiana and to ‘go Russian’ when telling her about Onegin; I particularly enjoy the line

‘he’s been abroad we hear…’

it’s so wonderfully parochial for a diplomatic soiree. The Altos got a short speech on transactional analysis for their

‘look at them, look at them!
She must get a husband,
that’s him for sure…’

in Act II and told to be in critical parent mode, which they took to with gusto. We gave ourselves 7 out of 10 this evening, and Nick agreed.

We have a great method for learning the words which uses an NLP technique, which is to print them up big on A3 sheets and stick them on the wall cupboards in the kitchen.  this means we see them a lot, on a subconscious level, and when we see them we are looking UP slightly in a more ‘performance’ posture.

If you’ve ever watched closely when someone is searching their visual memory, they tend to look up, sometimes rolling their eyes right up as though trying to scan their brain, so there’s no harm in ‘storing’ what you might be looking for, where you’ll look for it.  We then sing snatches while cooking, look up to check we’ve got it right, correct if necessary and move on.  Act III is right by the cooker at the moment, Act I is on the china cupboard… It works for me!

Anyway, Nick gave a short discourse on the ancient art of prompting, and did a little sketch of Pavarotti and the prompter at La Scala doing call and response.  He then prompted first words of lines for a bit which did away with fuzzy lyrics.

Nick’s latest installment of what he calls the ‘Readers’ Digest guide to Tchaikovsky and what interests me about him’ was a discourse on other Tchaikovsky operas, in particular the Queen of Spades, which Nick was introduced to Age 7, when his dad was singing in it, and should be included in our life’s journey; and The Enchantress, which according to the RDGT… is at least as good as the Queen of Spades and unjustly neglected.

Nick talks with such passion about opera that I sometimes feel I’ve been missing out – should have done it sooner, get immersed  in the genre etc, Nick has seen Opera all over the world, at the Bolshoi, for example- I’ve only ever seen Opera at ENO, on film and at Blackheath of course! ( a monumental digression here- if you have only ever seen opera on film, you haven’t seen it- we went to a production of Billy Budd at ENO which was being filmed by the BBC, and loved it, subsequently saw in on TV and couldn’t raise sufficient interest to stay awake.- It wasn’t just the same production, it was the actual same performance.  Keep music live, come to Blackheath Halls, 12, 13, 15, 17th July!)

As this was the final music only performance, Harry came along to make pleas for assistance with props.  I don’t know how I could have forgotten that we would need to help with props, it was a right saga last year.  I hope the stage crew have been given fair warning.

There’s something you need to know about Harry and props.  There is always food, and it is always real, and he expects us to eat it… last year we had what some of us were describing as ‘live’ soup – i.e. sort of HOT(ish).

So of course we need a cake for the party scene, which will be cut and eaten, so we need a fresh one every night, and its got to be big enough for 120!  This caused raucous laughter, but you know, someone will produce it.  Possibly several someones.  I found the perfect authentic 1930’s recipe, Mississippi chocolate marshmallow cake- it’s covered in baby marshmallows in pink and white so will fit the colour scheme for act II, and it doesn’t really matter what kind of cake is underneath.

Act I and II are set in the garden so we need plant pots, preferably with plants in them, big baskets like the kind you keep logs in, metal watering can, trowels and hand forks, metal garden table and chairs, steamer lounge, wicker chairs and table, side tables… all of which should be distressed as of being in the garden all year for some time, cushions and blankets in the right colour scheme and a harvest’s worth of corn cobs… you wonder what Harry imagines our lifestyles outside the opera are…

Act II additionally requires the food as mentioned above, plus (he did have the grace to admit it was unlikely) a pair of duelling pistols.

which pair would you like the engraved or the plain?

We calmed down and then with impeccable timing, one of the Sopranos pipes up with,

I’ve got a set, in a presentation box.

I think Harry nearly fainted. I hope they are insured for theatrical usage! 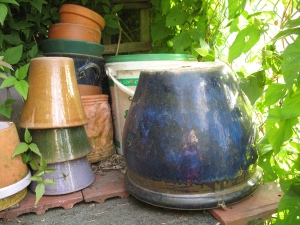 Sensibly, Harry suggested that for larger items we bring in a photo in the first instance…

As A and I are going straight on from the rehearsal on Saturday to see Lewis Reynolds’ production of Iphegenia  at the Scoop, it will definitely only be photos, so I have been running round taking pictures of plant pots … I even have some in the right colour scheme….