A and I are a bit last-minute with exhibitions and regularly miss things because we think we’ll go ‘later’ and then just forget.  However, we actually made it to the Folkestone Triennial with two days to spare.  We followed the yellow seagulls sprayed on the pavement from the station to the visitor centre. There was a lot to see, and we resigned ourselves to not managing it all. I particularly wanted to see the Martello tower installation Towards the Sound of Wilderness by Cristina Iglesias, but it was a long way out of town and we just hadn’t got sufficient energy.  So putting that to one side, high spots were: 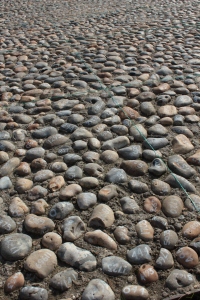 Folk Stones, (Mark Wallinger) a square of 19,240 pebbles set in concrete, each one numbered, and the total number is the number of British soldiers killed on the first day of the battle of the Somme: they set out for France from Folkestone.  This is a permanent installation.

While we were there a young man was laboriously cleaning each pebble.

Out of Tune (A K Dolven) The sixteenth century church bell suspended on the beach which may only be rung every two minutes as it drives the neighbours to distraction, and can be heard tolling at… 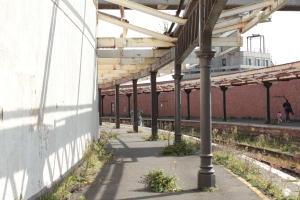 … the former harbour station, where the first world war troops moved from train to ship.  A bleak spot where nature is taking over – the perfect post-apocalyptic film set, all rusting girders, rotting wood and sprouting chamomile.  The art here is a rather odd 5 headed sculpture on a rug on the tracks; Rug People (Paloma Varga Weisz)  has a built-in anxiety – are these refugees arriving, or exiles leaving?  Either way, the train done gone; and it is the station which excites. 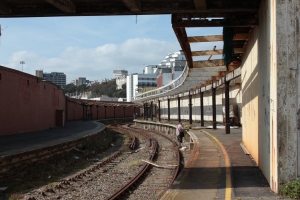 We were not alone – a girl child flitted amongst the metal columns and a man poked around the dishevelled rails, (“Isn’t this awesome?” he asked in delight) but there were not enough people to make anyone think they could possibly expect a train.

They were like ghosts, glimpsed from the corner of your eye.

The Navy in the Nave copyright Cherry Potts 2011

The Navy in the Nave – a fleet of model boats floating suspended for the ceiling of the ancient church of St Mary and St Eanswythe.

A and I argued over the pronunciation, and then forgot about it as we gazed at the extraordinary collection of vessels sailing from nowhere to nowhere, seemingly jostling for space. 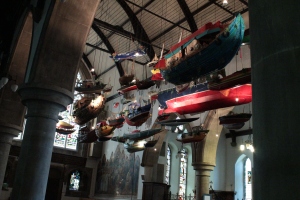 'For those in Peril on the Sea' copyright Cherry Potts 2011

The piece is called For Those in Peril on the Sea, (Hew Locke) and it is  as though we are looking up from the sea bed at a drowned armada, gradually settling down to join us.  It feels like something Terry Gilliam would dream up.  Oddly moving.

Folkestone in September is not wildly populated and there are a lot of dilapidated properties and empty shops.  It has only one small sandy beach, the rest are stony and a bit bleak, the harbour is attractive and there are plenty of fish shops, (more A’s thing than mine!).  We were lucky with the weather and it was a delight to walk along the seafront with warmth and late summer sun.

I’m glad Folkestone has the Triennial, because I wouldn’t have come otherwise and  it is important to visit our seaside towns, and celebrate them.

At particular points about the town there are plaques with locals’ comments on what you can see. Everywhere Means Something to Someone (Strange Cargo).  Just so.

I will probably be following the yellow seagulls again in three years’ time.

...like something dreamed up by Terry Gilliam ... copyright Cherry Potts 2011