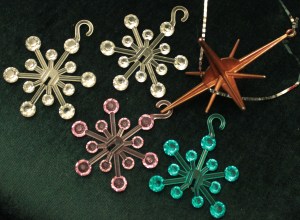 There’s nothing like being ill just before Christmas. We dragged round to get the  tree, and left it in the hall long enough for Julian to spray it in protest at the Burnham wood aspects of the yule branch.

I washed the cat pee off, cut the bottom off to get it in the stand, then left it in the living room for 2 days while getting up the strength to get the decs down from the loft, an annual torture as I hate the loft ladder, but given A’s capacity for falls, there’s no way I’m letting her up there.

So it was all a bit gritted teeth, and we didn’t even put on our favourite seasonal record  (Wassail! John Kirkpatrick, since you ask) as we usually do. 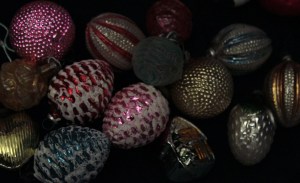 And then I started unpacking the decorations.

My mum gave me all her tree decorations earlier this year, on the grounds that she and dad can’t be bothered with a tree anymore.

very early 20th century decorations rescued from my Great Aunt Mattie’s house when she died – pine cones and berries and a little cottage. (I love that cottage when A & I we first had a proper tree together I bought  a replica).

I’m guessing about the vintage of these things but… 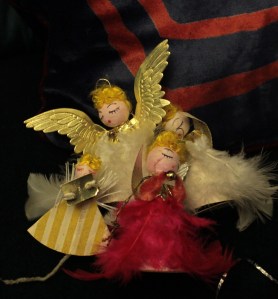 and what I refer to as the turnips – baubles with points to their bottoms a bit like onion domes on Russian churches.

1960s: bulls’ eyes – Baubles that have bites out of them and a bit of a Mod feel, and snowflakes and something that looks like Sputnik.

1970’s: psychedelic plastic tat – all day-glo orange and swirly patterns and bits of card and foil, and most importantly, see-through.

The photo cannot do these glorious things justice, they have to be held in the hand and turned to and fro, to catch and filter the light. I adored these as a child. 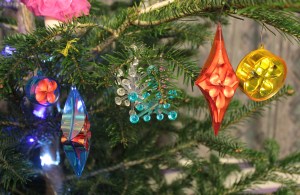 And then there are the icons of our modern era (relatively speaking) Our first proper tree was in about 1984. We bought the decorations from Lewisham market, and the back-of-a-lorry shop round the corner. a Fanfare please for… kitten-in-a-sock and Pink Bunny, without whom Christmas doesn’t have a hope.

I do occasionally make an attempt at a refined elegant tree, we once had two, one with all the glitz, and another one with nothing but glass on

it. (We actually have too many decorations now for only one tree, no matter we get the largest that will fit in the house.) I prefered the glitz.

The crowning glory of our tree (he says) is Cedric. Cedric is a teddy bear in a dress and angel wings who normally sits on the bookshelf with his more conservatively dressed buddies Adrian and Clive, who have matching jumpers and cricket flannels. Cedric lives for his two weeks in the spotlight (or fairy lights) A & C are grateful for the rest from him going on about the view.

So tree finally dressed, and in appropriate mood, the final addition to the event is the cherub’s candle driven carousel. This the ultimate kitsch item, which I can remember being entranced by aged about 6. You aren’t the video because A was chatting in the background, so you’ll have to imagine the incredibly annoying tinkling that gets louder as the candles get hotter and send the cherubs flitting about faster and faster, in hysterical tribute. How did I ever find that sound attractive?!