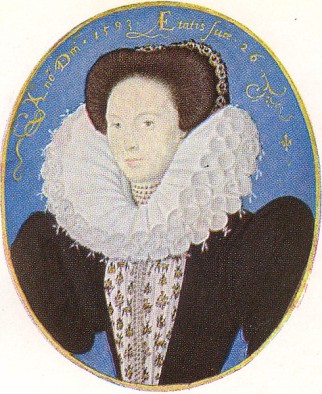 Aemelia (or her sister Angela) Bassano

A new month, but no birthday to celebrate. I’ll have run out of people whose dates I haven’t found soon and then where will I be?

Emilia was  Jewish, the  illegitimate daughter of Venetian musician Baptista Bassano and Margaret Johnson, her father worked as a court musician to Henry VIII. She married Alphonso Larrier, another musician when she became pregnant by her lover Lord Hunsden. The portrait here (by Hilliard) is almost certainly of one of the Bassano sisters, and even if it isn’t Emilia, gives us some idea what she may have looked like.

Emilia was a feminist and a poet – the first woman in England to publish a book of original poetry, Salve Rex Deus Judaeorum; in it she works her way through just about every woman in the bible, pointing out how important they are to Judaism and Christianity.

She has been claimed as Shakespeare’s Dark Lady, (you know, – my mistress’s eyes are nothing like the sun? – that one) and even more delightfully and controversially to have written or collaborated on some of his work… Her family certainly knew people Shakespeare knew, and there is a reasonable likelihood that her brother-in-law and Shakespeare worked together at some point. It’s an attractive idea, but let’s stick to what is certain.

But surely Adam cannot be excused,
Her fault though great, yet he was the most to blame;
what weakness offered, strength might have refused,
Being lord of all the greater was his shame…
… If Eve did err, it was for knowledge sake,
No subtle serpents falsehood did betray him
If he would eat it, who had power to stay him?
Not Eve, whose fault was only too much love,
which made her give this present to her dear,
That what she tasted, he likewise might prove
Whereby his knowledge might become more clear…
…Then let us have our liberty again,
And challenge to your selves no Sovereignty;
You come not into the world without our pain,
Make that a bar against your cruelty;
Your fault being greater, why should you disdain
Our being your equals, free from tyranny?

[men…] Forgetting they were born of woman, nourished of women, and that if it were not by the means of women they would be quite extinguished out of the world, and a final end of them all, do like vipers deface the wombes wherein they were bred.