Sylvia Beach was born on March 14, 1887 in  America. She studied French Literature at the Sorbonne in 1917, discovered a bookshop La Maison des Amis des Livres and fell in love with its proprietor  Adrienne Monnier and lived with her for the rest of her life, apart from when she was interned during WWII.

Sylvia opened her own bookshop in 1919, the famous Shakespeare and Company. Two years later she moved premises so that her shop was opposite Adrienne’s.

Sylvia’s paid for  James Joyce’s novel Ulysses to be published, but when he got a contract from Random House, he forgot all about her.

During the 30’s the shop struggled and friends helped Sylvia out with subscriptions and benefit readings. In 1937, Sylvia was awarded a Knight of the Legion of Honor.

Sylvia definitely gets an invitation to the party, we could talk books til the morning… 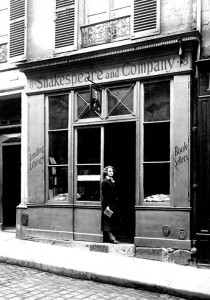