So a week in Cumbria because one of the poets in The Other Side of Sleep had organised a reading in Grange-over-Sands and it’s too far to go and not stay over, and if you have to stay over, well…

A few days with friends in Bath and a stop over with another on the way to Cheltenham.

So I briefly pretended I’m a poet last week. As I said whilst doing so, I am not a poet, I occasionally write poetry, it really isn’t the same thing. So here’s me pretending to be a poet, with one poem and two flash fictions that happen to kind of work as poems. 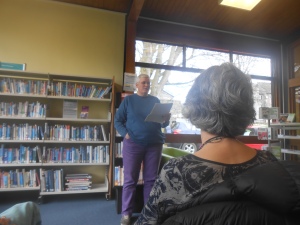 If you want to hear how real poets do it you can listen over on the Arachne Press website. I’ll be pretending again at the Cheltenham Poetry Festival on Saturday in the company of Angela France, Math Jones, Bernie Howley, Kate Foley and Jennifer A McGowan.

In the meantime I’ve been listening to Ursula le Guin on Radio4, first an epic 2 hour catch-up with The Left Hand of Darkness, and then a 30 minute documentary, with the woman herself, and various writers who admire and were influenced by her, including Neil Gaiman,  Karen Joy Fowler and David Mitchell. I found myself falling in love with LHD all over again. I read it first in my teens, and again about 5 years ago, and I am in awe of le Guin’s talent and the subtlety of the adaptation for Radio by Judith Adams, everything I remember is there, and the bitter, bone deep cold swells through the recording so, so well. Listening to Gaiman and Mitchell say words to the effect of ‘this is why I became a writer’, I wonder: is this why I became a writer? (and unlike ‘poet’ I do identify as ‘writer’ because even when not writing I obsess about it – think about my characters, interrogate my bad habits, consider plot twists, discover great titles in over heard conversations…) and I think the answer is probably YES.

The Left Hand of Darkness has been one of  my favourite books since I first read it, and unlike many others was even better on the second reading, and still made me cry (and I think another re-read is due). Discovering it so early, probably about the time I began to seriously think I might write ‘for real’, it must have had a huge impact. It is hard to tell, I read voraciously at that point, three books a day at weekends, back to back, swimming in words. I’m sure I amalgamate many of those books in my mind, not sure what comes from where, but LHD stands out from the morass, as do other of le Guin’s books: The Tombs of Atuan and The Lathe of Heaven in particular. They are doing an adaptation of A Wizard of Earthsea (My first ever le Guin read, when I was probably nine or ten) on Radio4 Extra next week – LISTEN!

Did you think you were going to get away without a reference to music? Ha! fooled you.

I spent Saturday immersed in songs about making choices and community and freedom, taught by the marvellous Lester Simpson in preparation for the next ‘big idea’, a celebration of Magna Carta in the week of the actual 800 year anniversary of the first draft being signed (if you ignore the change of calendar in the 18th Century). Nearly 50 people turned up and we sounded amazing. Here’s a sample…

You’ll get a chance to hear the songs we are working on in a more polished format at West Greenwich Library, 7:30 on Thursday 18th June. More on that nearer the time. There is a call out for STORIES for the event over at Arachne, you have til Mayday.

Right. Off to my next ‘holiday’, in Bath for readings of Solstice Shorts at Oldfield Park Books, this evening!